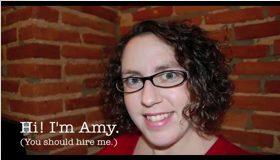 One of the best things about social media is it gives job seekers an opportunity to pick an area where they can excel — it’s different for every job seeker. Some are great using video, others may want to blog. Many more can share expertise via Twitter in 140 characters or less and connect with potential colleagues and contacts.

At the same time, some employers are using social media and thinking “outside of the box” when it comes to hiring. A case in point, a friend recently let me know his sister, Amy Bailey, is in the running for an awesome job at HopScout. They are looking for 5 editors to write guest posts, test products and be community managers of sorts. They also want their editors to be buyers and attend trade shows. The job is targeted to stay-at-home parents who want a little work and money on the side.

Instead of advertising and asking for resumes, they require applicants to post a video on Facebook and are running an online vote to select finalists. It makes a lot of sense, as it not only tests video skills (part of the job), but also the applicants’ ability to leverage the social web. It’s kind of a “social proof” job interview screen. People may say, “I have this many friends or “likes” on Facebook” or “X people follow me on Twitter,” but it comes down to actually calling a community to action to secure votes and convince people to take a minute to vote! People who can do that can also probably get the job done!

I asked Amy what she thinks about the process from the job-seeker’s side:

This method of interviewing people puts a minor barrier to entry, which is a great way to weed out applicants. It’s a lot easier to send off a resume that you’ve brushed up than to learn how to make a video you’d be willing to publish. They’ve received over 150) submissions so far, and if they’d asked for resumes, I’m guessing that number could easily be much higher.

The first stage of this process focuses on the number of votes your video gets, though other factors (creativity, innovation, fair play, quality of content and sense of humor) may be considered as well.Ã‚Â  I see the point of focusing on popularity because on one hand, this is an e-marketing job that relies on building a social network. At the same time, the votes aren’t necessarily coming from anyone from the target market of the site. Ã‚Â However, Hopscout’s Facebook page has netted over 10,000 likes in a little over a week, primarily due to this contest, so it seems to be a successful marketing campaign regardless of the outcome.

I’m impressed that they’re so optimistic – that before the contest started, they believed 25% of their top-voted videos would have been made by people who can get the job done – people who can write, appeal to an audience and give fair (and fun) evaluations of products. I think that took a lot of faith on their part, but I think it was a smart move – there are some great videos and some very creative moms and dads, and hopefully that will translate into the kind of employees they’re looking for. If they hire me, their plan definitely worked. 😉

If my video is one of the top 20 videos (I could really use your support!), then I’ll get a chance to review a product and show them that I’m worth hiring. They’ll hire five people from this second stage of the interview process.

Consider this…You never know when you’ll need to – or want to – leverage a community to help you land a job. You may never be in a situation where you need actual votes via Facebook to get a position, but when you think about it, isn’t any endorsement or referral kind of like a “vote?” I believe the biggest benefit to social networking is the ability to grow your network and expand the number of people who know and like you well enough to care if you get a job or a gig. The more people out there rooting for you, the more likely you are to score the opportunity you want.

I hope you’ll vote for Amy, and leverage your networks to see if you can win her some votes. Why? Because she’s my friend’s sister, and I’d love to help her out. (A bonus? She’s actually perfect for this job based on her credentials!)Ã‚Â  In the meantime, think about your own network and what “votes” you need to get to land your next gig!