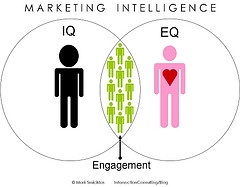 Companies are looking for people who are qualified and those who make a direct connection between their skills and what the employer wants. It’s still difficult (although not impossible) to transition to a new field. It’s about demonstrating that you can solve the employer’s problems and that you can “fit” into the company’s culture.

To be successful in a job hunt, you will not only need to demonstrate an association between what the employer wants and your skills and accomplishments, you will need to be able to tell your story in a way that makes it obvious you have the emotional intelligence/emotional quotient (EI/EQ – or soft skills) to get the job done.

A quick definition is in order. Here is one that I like and is easy to understand from Mike Poskey, VP of Zerorisk HR, Inc:

Emotional Intelligence..is defined as a set of competencies demonstrating the ability one has to recognize his or her behaviors, moods and impulses, and to manage them best according to the situation.

The Sodexo (one of the largest food services and facilities management companies in the world) blog reminds readers that “businesses that will succeed in the 21st century will be the ones that allow employees to bring the whole of their intelligence into the work force â€“ their emotional and intellectual self. Not only does this impact morale, but productivity increases, too.” A recent study from Virginia Commonwealth University shows that “high emotional intelligence does have a relationship to strong job performance — in short, emotionally intelligent people make better workers.”
If you are still not convinced that you need to start paying attention to emotional intelligence, my friends over at Talent Culture recently shared information suggesting that “companies are really investing in assessing and developing emotional intelligence to improve the bottom line:”

(Side note: Be sure to visit Talent Culture’s useful Twitter chat – #TChat on Tuesdays from 8-9 pm Eastern time.)

With all of this research on emotional intelligence, it is time for job seekers to start paying attention. Your job search materials must competently tell your story and illustrate that you not only have the capacity to get the job done (that is, you have the specific skills, training and accomplishments), but that you have the ability to fit in and to bring that talent to the next — emotional — level.

BE the person who is willing to go the extra mile. Show, don’t tell. Maybe that means you hold the door for somebody behind you on the way to the interview. Or, that you let someone take the parking space you both were eyeing. Who knows â€“ you might have been angling your potential new boss out of her space!

Obviously, thereâ€™s much more to this than simply being courteous– emotional intelligence is complicated and difficult to pin down, but one aspect is being aware of other peoples’ needs. Look at your network. Do you have one? Are you a connector? Do you try to put people in touch with each other, just for the sake of doing it? If so, you are SHOWING that you care about people â€“ that you are a team player.

What would your boss or colleagues say about you? Do they think only about your competence, or will they comment on your great attitude, how you lead by example and show everyone the same respect? Are you the one who pitches in and stays until the end, or are you running out to handle personal matters? Everything adds up, and how you behave will shape how people see you.

Think about it â€“ do you have the necessary skills to fit in and get the job done? Do you agree that skills such as being able to cooperate and be a team player are crucial for success in the next decade? Stay tuned for more about this topic, including how to improve your EQ and what thought leaders say about the subject!