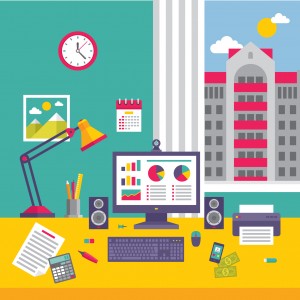 You’re starting a new job. How can you avoid getting off on the wrong foot? Avoid the following and you’ll be more likely to have a job next week.

Don’t wear an outfit if you have to check with your friends first to see if it will be “okay.” Hopefully, you have a good idea of the office dress code. However, some workplaces support very casual attire, and you may be tempted to sport something that is a little too casual. If you’re tempted to call a friend to ask if he or she thinks you can get away with wearing your new tank top or your perfectly torn jeans, think again. It doesn’t hurt to dress up a little when you start your new job. Plan everything in advance, as you would for an interview, so you will be comfortable and suitably attired from the start.

Don’t be late. Perhaps there is a lot of traffic, but there are no excuses for being late your first week. If you have to arrange to be early (even very early) to ensure getting there on time, do it. Do not put yourself in a position of offering excuses for being late on the first day because you didn’t understand the traffic patterns. “The early bird gets the worm” isn’t just a trite cliche; it’s a reminder that when you appear prepared and ready, you’ll put yourself in a position to succeed.

Don’t flub your introductions. Think beyond “My name is…” Be sure you can explain who you are and what you do! What do you want them to remember about you? What do you want to be known for? Be sure to work on your eye contact, a pleasant smile and a firm handshake. All of this will contribute to the first impression that your colleagues have of you.

Don’t forget your colleagues’ names. Don’t be the one who tells everyone you’re “not good with names.” Maybe you really aren’t good with names. However, your job is to become better at it before you embarrass yourself and forget your boss’ name. A few tips: Use people’s names as soon as they are introduced. Say, “Nice to meet you, Sara.” If you didn’t catch the name, or are unsure of the pronunciation, ask the person to repeat his or her name, and make a real effort to learn it. Take notes so you’ll remember people later. For example, jot down something to help you match a new colleague’s name and face. Another trick? Make an association with the person’s name. If Tom is tall, think, “Tall Tom” and you’re more likely to remember it later.

Get my free white paper: 5 Mistakes Preventing You From Landing a Job This Week

Don’t be a slob. If your co-workers start to question their choice in hiring you the minute you dump your things all over your desk, beware! Look around to see how other people organize their areas. If no one else has personal items or photos out, consider keeping your area clear of those types of things. Don’t leave your food out or extend your personal items into anyone else’s space.

Don’t make a big decision without asking a question. If you’re of the mind that it’s “better to ask forgiveness than permission,” think again. When you’re new at a job, ask before you do anything significant for the first time. Don’t make executive decisions that otherwise wouldn’t be your call. Keep your questions to things that you are curious about and try to save the “Why do you do it that way instead of this other way?” types of inquiries for later on.

Don’t eat the pudding from the refrigerator. You know how possessive people can be about their food! Do not take anything that doesn’t belong to you, or you could risk wrath that might impede your career path.

Avoid loud phone conversations. In the “open” workspaces so common today, it’s virtually impossible to avoid overhearing colleagues’ personal phone conversations. If at all possible, stick to texting when absolutely necessary to connect with your friends outside of work. Do not be the “loud talker” everyone can’t stand to have in the office.

Don’t bolt at the end of the day. Especially when you start a new job, don’t be a clock watcher. It can’t hurt to stay a little beyond your designated hours so that everyone sees that you’re more interested in getting the job done and less interested in running for the door.