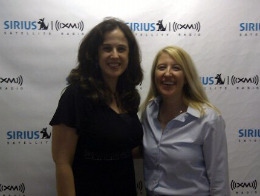 Are you tired of your job? Statistic show that a lot of people are!Ã‚Â  I recently had a chance to meet Maggie Mistal, a certified life purpose and career coach, and listened in to her tips to help people who need to get that “honeymoon feeling” back at work.

CNNMoney.com reported on The Conference Board’s survey that says U.S. worker job satisfaction is at a 22-year low:

“Fewer than half of U.S. workers are satisfied with their jobs, the lowest level since record-keeping began 22 years ago…The Conference Board’s survey polled 5,000 households, and found that only 45% were satisfied in their jobs. That’s down from 61.1% in 1987, the first year the survey was conducted…Almost one-quarter of respondents said they didn’t expect to be at their current jobs within a year.”

That is a lot of unhappy people!

Don’t despair, there are a lot of things you can do if you are in a rut at work. Maggie Mistal hosts a weekly national radio show called “Making a Living with Maggie” on SIRIUS XM. We had a great conversation and she invited me to join her in the studio to listen in during her radio spot on Living Today with Mario Bosquez, where she offered some ideas for people to help them get that “honeymoon” feeling back on the job.

A few of Maggie’s suggestions:

A really interesting point Maggie made during the show was about taking calculated risks. She noted that most successful people have taken a risk that has resulted in their success. Being afraid of change won’t help you propel your career forward! In fact, Maggie will have Margie Warrell, best-selling author of Find Your Courage, 12 Acts for Becoming Fearless at Work and in Life on her show on Martha Stewart Living Radio tomorrow, July 2nd at 4 pm Eastern/1 pm Pacific time on Sirius 112/XM 157. (You can get a free trial of SIRIUS to check it out!) They’ll talk about how you should “not let fear keep you from work you love and about how to gain independence from work that’s not working for you!”