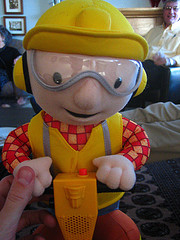 Networking and social networking tools are big topics of conversation when it comes to the job hunt. I’ve written about using Facebook to find a job, but I wondered if Twitter, the microblogging platform/social network would be a rich source of potential job opportunities.

So, I asked, “Can You Get a Job on Twitter?” It seems that the answer is a resounding (Bob the Builder-esque) YES you can!

Jessica Smith found her current “dream job” as Chief Mom Officer simply by tweeting to approximately 400 followers, “Anyone looking for a marketing or biz dev person?”Â  She reports receiving a DM from Max Ciccotosto, Founder of Wishpot.com, within minutes, asking for a phone interview! The result, Jessica landed “a flexible, family-friendly job doing marketing, biz dev, and community management for Wishpot’s baby channel making competitive pay.” She makes a point to pay it forward, and now helps other companies connect with moms who have the skills they seek.

Kyle Flaherty‘s use of Twitter for a job hunt resulted in moving his family to Austin, TX from Boston. In March, he tweeted the news to approximately 650 contacts that he had left his job and had no immediate plans. He included a link to a blog post outlining his interest in connecting. He explains, “Within hours I had several emails, IMs, phone calls and Tweets about the topic and it actually ended up that I took a new job… This may have happened without using Twitter, but since I was looking for a job that would allow me to use social media tools like microblogging, I knew that this was a targeted way to network myself and could lead to a job more inline with what I was wanted.”

Kyle’s boss at the job in Austin, Pam O’Neal, explains that she had the firm’s PR agency on the lookout for someone who would make a good addition to their team. Her contact saw Kyle’s tweet and alerted her that he would be a fantastic hire. O’Neal explains,

“Kyle really took an out of the box approach using Twitter. He had already informed his employer that he wanted to make a career move and made a list of the exact opportunity he was looking for, so he posted an announcement to his 700+ Twitter followers and described that role. So, between the agency referral, Kyle’s use of Twitter and the insights he’d posted on his blog, I knew he would be a great addition to the team. I emailed him immediately.” (You can read more about Pam’s perspective HERE.)

Heidi Miller, the “Podcasting Princess” found a three-month freelance project using Twitter. She harnessed the power of her Twitter network (around 900 people) by tweeting updates about her job hunt. (“Applying for a social media position in Boston,” “Applying for a cool social media position in London,” etc.) Although many of her colleagues questioned the wisdom of being so open about her search (would she look desperate? foolish?), in the end, the ends justified the means.

Heidi explains, “One day, one of my Twitter buddies, Amy Gahran, sent me a DM that our Twitter buddy Susan Mernit was looking for people for a project. I’d met Susan at BlogHer the year before, so I sent her a Tweet asking about the project. A resume and phone interviews followed, and I got the position.”

“What I discovered is that Twitter is just another way of communicating with your network. When you are seeking a position, you tell your associates, colleagues and friends so that they can keep their ears open for you. That’s exactly what I did on Twitter–by updating on my job search, I ended up with a contract position that since has opened doors to several offers for permanent positions for me once I finish up here.”

(It’s interesting to note here how Heidi’s story really combines both in-person and social networking. She used online tools to keep in touch with people she may have met at conferences or via other means, which ultimately led to her finding a job.)

Clearly, if you are looking for a job involving social media, Twitter is one great place to cast your networking net. However, don’t ignore the possibilities to use Twitter to make connections that could lead to opportunities in any number of areas. The fact is, job search networking is much more effective when you make “loose” connections – touching base with people you do not know well, but whose networks and contacts are much different from your own.

I’ve noticed that Twitter has been getting quite a bit of press in mainstream media outlets lately. My colleague Dan Schawbel, the Gen Y Personal Branding guru, notes that Twitter already has 3 million users. Surely, there are some great connections for your job hunt just waiting to be found! As more and more get involved (dare I say addicted?), the more opportunities there will be to leverage Twitter for job search networking. Don’t be the one left behind!

Some information you may find useful:

Convinced that Twitter may be a good use of your time? Feel free to follow me:
http://twitter.com/Keppie_Careers