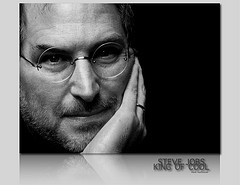 Twitter was buzzing tonight about the sad news of Steve Jobs’ death. The visionary and former Apple CEO (he resigned in August, when health problems prevented him from serving), was only 56, but had been fighting pancreatic cancer for eight years. ABC News broke into programming to announce the death, a significant indicator of the affect he had and his contributions to society.

Jobs had a very unique and interesting rise to success. Famously, he never graduated from college, and his name often comes up as an example of why you don’t need to graduate college to be successful. Lucky for him, he was exceptional, and his lack of a college degree did not prevent him from achieving so much.

In fact, you may know, Jobs gave a very famous commencement address (read the full text here), when he was CEO of Apple Computer and of Pixar Animation Studios on June 12, 2005 at Stanford University. In the address, Jobs shared three stories, all of which have very strong career messages worth remembering.

The first is a message about connecting the dots. Jobs took a calligraphy course after he dropped out of college. As it turned out, his school had the best calligraphy instruction in the country. He explained, how he “learned about serif and san serif typefaces, about varying the amount of space between different letter combinations, about what makes great typography great.”

He was fascinated, but assumed the knowledge was impractical. It was only ten years later, “When designing the first Macintosh computer, it all came back to me. And we designed it all into the Mac. It was the first computer with beautiful typography. If I had never dropped in on that single course in college, the Mac would have never had multiple typefaces or proportionally spaced fonts. And since Windows just copied the Mac, it’s likely that no personal computer would have them. If I had never dropped out, I would have never dropped in on this calligraphy class, and personal computers might not have the wonderful typography that they do. Of course it was impossible to connect the dots looking forward when I was in college. But it was very, very clear looking backwards ten years later.”

What dots might you be able to connect, looking back? (Remember, connecting those dots in the moment can be kind of like trying to navigate a life-sized corn maze. From above, it is easy to see how to get out, but when you’re in it, not so obvious.)

Jobs’ second story involved being fired from his own company, which he and his partner started in his parent’s garage. After 10 years, Apple grew to a $2 billion company with over 4000 employees. He noted, “We had just released our finest creation – the Macintosh – a year earlier, and I had just turned 30. And then I got fired. So at 30 I was out. And very publicly out. What had been the focus of my entire adult life was gone, and it was devastating. I didn’t see it then, but it turned out that getting fired from Apple was the best thing that could have ever happened to me. The heaviness of being successful was replaced by the lightness of being a beginner again, less sure about everything. It freed me to enter one of the most creative periods of my life.”

How can you rethink your career or job situation? Looking back, might a job loss be the best thing that ever happened to you? Of course, we remember, Jobs was exceptional, but it is not impossible to reframe and recreate your life. Often, the best success comes after a major failure.

Strangely enough, Jobs’ last story was about death. He remarked, “When I was 17, I read a quote that went something like: “If you live each day as if it was your last, someday you’ll most certainly be right.” It made an impression on me, and since then, for the past 33 years, I have looked in the mirror every morning and asked myself: “If today were the last day of my life, would I want to do what I am about to do today?”

It’s nothing we haven’t heard before, but it is not so easy to live your life apart from what Jobs described as “alll external expectations, all pride, all fear of embarrassment or failure, the things that just fall away in the face of death, leaving only what is truly important.

Jobs went on to say, “Your time is limited, so don’t waste it living someone else’s life. Don’t be trapped by dogma, which is living with the results of other people’s thinking. Don’t let the noise of others’ opinions drown out your own inner voice. And most important, have the courage to follow your heart and intuition. They somehow already know what you truly want to become. Everything else is secondary.”

It seems like good advice, even though it is easier said than done. I hope, though, you can take some inspiration from a man who died much too young, who spoke about death only a year after thinking he would face a very imminent demise from pancreatic cancer. (It turned out his initial diagnosis was wrong and he had hope of a much longer life than he had originally thought.)

I think the best lesson to learn from an exceptional and unique visionary is that we all have talents, hopes and dreams, and it is up to us to move ahead to try to make them come true, no matter what obstacles we face. While few of us will be “breaking news” or “trending topics,” each one of us has special qualities to uncover and tap. Take some time to think about yours.