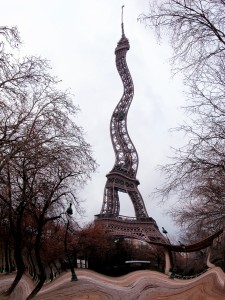 What drives you crazy about the corporate world? In an environment where conformity seems to be the rule, you may have even caught yourself participating in some of these hated rituals â€“ even as you mock them to friends in happy hour after work. In the new, third edition of her book,Â They Don’t Teach Corporate in College, Alexandra Levit points out these conventions and traditions we love to hate.

1. Corporate DÃ©jÃ  Vu.Â It seems as though it’s a requirement in business that you spend huge amounts of time reporting the same information in a dozen different formats, attending status meetings where conversation from the week before is repeated word for word and where you put out the same fires, because your departmentÂ doesn’t learn from its mistakes.

2. Name dropping.Â Also known as “invoking syndrome,” this occurs when colleagues try to persuade you to do what they want by name-dropping someone higher up. Whether the executive manager was actually involved or not, invoking him is a manipulative tactic used to get you to bend to your colleagues’ wishes. For example: “Really? Well, I spoke to the CEO last night, and he told me we have to do the event this way.”

3. Ego-mania.Â When certain people reach a high level in a company, they think that they are better than everyone else and that they are entitled to be treated like a god. Regardless of the issue, they believe they are always right and that they can’t possibly learn anything from someone lower on the chain.

4. Corporate jargon.Â If you think everyone in the business world speaks yourÂ language, think again. TheÂ business world’s languageÂ is one of subtlety, filled with euphemisms and pet phrases to cleverly disguise what people actually mean.

5.Â Bureaucracy.Â How many departments does it take to screw in a lightbulb? Corporate business has a lengthy approval process for everything, and companies delight in changing those processes constantly so that you’re never sure which 10 departments you need to consult before a decision can be made.

6.Â Hypocrisy.Â Don’t you just love the way some companies tout values such as quality, entrepreneurship, innovation and integrity, when they would be perfectly happy if their employees just kept quiet and never suggested a disruptive change?

7. Uncommon Sense.Â IsÂ common senseÂ dead in the business world? People might make a joke of it, but this dearth of logical thought is kind of sad. It’s also frustrating when the obviously correct way to do something is staring everyone right in the face, and no one sees it.

8. Nonsensical Change.Â Every now and then, companies will decide to throw their departments up in the air and see where all the pieces land. Yes, it’s the reorganization (otherwise known as the dreaded re-org). Despite the fact that it results in mass confusion, greatly decreased productivity and low employee morale, companies continue to do it year after year.