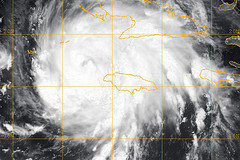 What an incredible coincidence (or maybe it isn’t?) that, just as the U.S. Gulf Coast areas hit by Katrina three years ago should be pausing to remember the victims of that horrible disaster, Hurricaine Gustav threatens the region still struggling to recover three years later.

This time, it seems as if people aren’t taking any chances. The AP reports that 1 million residents fled the Gulf Coast, well ahead of any official orders to evacuate the area. The mayor of New Orleans has told tourists to leave, hospitals are preparing and shelters are being set up. (The Superdome NOT being one of them.)

Hopefully, lessons learned from the Katrina disaster will inform and improve the response to this oncoming storm. People have not forgotten Katrina and will do what they can to avoid getting involved in a similar situation.

Does it always take an epic catastrophe to learn from our mistakes? Ideally, we will all be able to recognize that there’s something to be learned from every mis-step, especially as mistakes pertain to job hunting.

In my networking, I’ve recently spoken with two job hunters who face similar situations. Both out of work, they desperately needed jobs to earn income. As a result, both allowed themselves to be sucked into interviews and positions that were not well suited to their skills and experience.

“Amy” said to me, “I knew that I didn’t really have the experience to do the job. There were red flags, but they were willing to hire me, so I signed on.” Unfortunately, the result was that the contract to permanent position did not become permanent when the organization realized that their hire couldn’t manage the project they had in mind. While she had a paid job for several months, she stopped job hunting while employed, and when her concerns became reality, she realized that she had wasted several months when she could have been seeking the permanent job she needs.

“Kris” describes a similar situation. She took a job that she knew she couldn’t really do. She’s not sure how she landed the position, but after only four weeks, faces being asked to leave.

“Amy” is back on the job hunt, and finding that things haven’t changed…She’s still being recruited for jobs above her qualifications. “Kris,” facing her worst fears, now wonders how to approach her job hunt.

Maybe these stories are not familiar, but you have a different recurring job hunting problem? I met “Bill,” who says he “keeps coming in second” in his search. Others keep sending out the same resume to literally 100s of jobs, but don’t get a single interview.

Job seekers need to take stock and learn from their mistakes. Maybe trusting their own instincts will help. Maybe asking for help with a resume or interview coaching will make the difference. Recognize that doing the same thing over and over again, but expecting a different result, isn’t smart. (Not a political statement, but I can’t help but think that this sentiment is relevant here!)

Just as you (hopefully) wouldn’t hole up in your New Orleans home as a huge storm approaches, don’t make the same mistakes over and over in your quest for a new job. Take some time to evaluate your plans and consider seeking some help. Otherwise, you may find yourself facing a job hunting disaster, partly of your own making.

If you want to receive free up-to-date tips to help with your job hunt, Click here to subscribe to receive future blogs sent directly to you!