I’m not going to pretend I have been following this story, but some friends were posting about it on Facebook, and I couldn’t help but think of what a great “career” post/reminder it makes.

Tiquan Underwood, a defensive lineman for the Patriots, was released from the team just before the Super Bowl, as reported by the Yahoo! Sports Blog. According to the article, it’s the third time the Patriots have cut him this season, and the move was not punitive, “The Patriots simply wanted another defensive lineman on the roster.”

Social media (especially Twitter) allows us to hear directly from people of interest — uncensored — as soon as news happens. 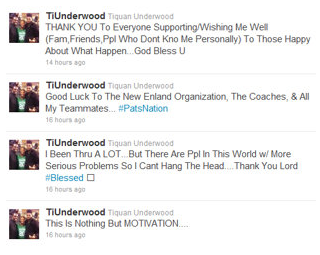 In these cases, it’s not unheard of to find derogatory tweets bashing the offending organization. People would probably understand if an angry player lashed out at a team that let him go right before THE big game. But, as you can see from a series of tweets captured here, Tiquan handled himself like a class act. I took a look at some of his tweets during the game, and they were supportive of the organization that just fired him.

It’s a good lesson in how you want to be remembered…Most of us don’t have a slew of people interested in our career ups and downs, but it isn’t difficult for potential employers or networking contacts to judge you based on how you behave under pressure.

You can be the employee who angrily lashes out and is considered a loose cannon, or you can take a play from Tiquan Underwood’s book. Your choice.