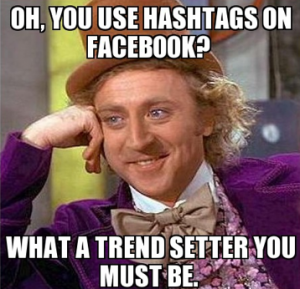 Facebook has hashtags; they are rolling out this feature to users now. What does it mean to business owners and job seekers? It’s another opportunity to make it easy for people to find you – if you adjust your settings correctly.

If you don’t use Twitter, where we’ve been using hashtags for years, this concept of adding a # to a word to join a conversation or to be found is a little foreign. However, it’s easy to get into the hashtag spirit! All you need to do is add a # before any word and it automatically becomes a hashtag. Like magic, right?

For example, I may “tag” an update about this post on Facebook as #HashtagsOnFacebook. Unlike Twitter, where you are limited to 140 characters in an update, which necessarily limits how long your hashtag is, on Facebook, I expect people will go crazy and have a lot of fun with hashtags. Some uses are simply silly or ironic. I have a friend who posts photos of her granddaughter every Friday. She could “tag” those posts #FabulousDressUpFridays, and all of her friends could click through to see them.

An ironic hashtag you may see? #FirstWorldProblems. It’s a pretty common one on Twitter when people are complaining about things they know are really no big deal. For example, a post would read: “Got dinner an hour late and it was cold. #FirstWorldProblems.”

In addition to frivolous uses, once things shake out and people start using common hashtags, you can jump on this bandwagon to be found more easily and to engage in online conversations with people you don’t already know.Â  For example, if you post a job, you can tag it #JOB or, even more specifically #ITJob. If it’s a public update, everyone who follows that hashtag can see your post. If you sell a product or have a store, you can identify a hashtag to go along with it. For example, #Consignment if you have a consignment store. You could even try something like #BestPopsicles if you sell ice pops, for example.

Something else you may see: people tagging events. For example, if you go to a conference, on Twitter, you can often follow along by watching the hashtag for the conference. Now, you’ll be able to do the same for Facebook. Similarly, during television shows or sporting events, people may use hashtags when they write updates about those programs orÂ  events. Usually, social media savvy programs post their hashtag on the screen so everyone can follow the same stream of information.

The jury is still out on how people will actually use hashtags on Facebook. It will be novel at first, so you’ll probably see a lot of hashtagging until we know how useful these will be for marketers and typical users.

Unlike Twitter, where your tweets are generally public (unless you make them private), most people maintain somewhat private Facebook pages, available to their friends, or perhaps also to friends of friends. It’s important to know who will be able to see your hashtags, especially if you have in mind to use them to advertise your business or service.

You can use hashtags on personal profiles, in comments andÂ  on your pages. Mari Smith, a well-known Facebook guru notes, “Individual comments on threads do not surface in hashtag searches; just posts show in searches.” So, if you want something to show up in search, include it in a post, not on a comment.

So, if hashtags are private, how are you going to attract new people who are not connected to you — assuming that you want to make the most of being found via your Facebook hashtags? You need to create public updates!

This is easy to do. Follow the link on the top of your Facebook page to check your privacy settings. Once there, click on the icon that says “Followers” on the left side of the screen (shown below).Â  Then, under Who Can Follow Me, select the drop down that says “Everybody.” Â This will give you an option to create public updates and for people to “follow” your public updates. For example, I use this feature on my personal Facebook page. While I would prefer people find and follow my Keppie Careers page (if we are not friends), I often publish public updates on my personal page that some people receive in their feeds. 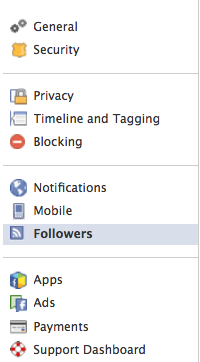 Once you enable everyone toÂ follow you,Â you should see a new option when you post a status update. Take a look at the sample status update above. You can see how the #Hashtag is highlighted in blue, which means it will be enabled to be found. Click on where it says “Friends” and the drop down menu should offer “public” as an option. Select it if you want your hashtag to be public.

When you do choose to make some updates public, make sure to check the next time you go to make a “friends” update that the status has not defaulted to public. That is the main risk of creating public updates: it’s up to you to be sure your status is correct when you make your next update.

What questions do you have? Will you use hashtags to try to extend your reach and your network? Share your thoughts in the comments!