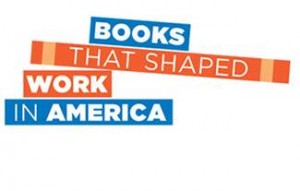 From Ben Franklin to Betty Friedan, from “Of Mice and Men” to “The Devil Wears Prada,” the U.S. Department of Labor launches the “Books that Shaped Work in America” project. This Centennial project invites the public to compile a list of books about work, workers and workplaces and learn about department’s mission and history.

WASHINGTON â€” From Ben Franklin’s “Poor Richard’s Improved” to Sonia Sotomayor’s “My Beloved World,” nearly 100 titles of fiction, nonfiction, plays and poetry begin the initial roll of Books that Shaped Work in Americaâ€”a Centennial project of the U.S. Department of Labor in partnership with the Center for the Book in the Library of Congress.

The web-based project, www.dol.gov/books, launched as part of the department’s ongoing commemoration of its 100th anniversary, aims to engage the public about the Labor Department’s mission and America’s history as a nation of workers as portrayed through published works.

“The Books that Shaped Work in America initiative explores the dignity of work and our progress in expanding America’s fundamental promise of opportunity for all through the lens of literature,” said U.S. Secretary of Labor Thomas E. Perez. “Think of this effort as an online book club where people from all walks of life can share books that informed them about occupations and careers, molded their views about work and helped elevate the discourse about work, workers and workplaces. At the same time, the site provides a unique way for people to learn about the mission and resources of the U.S. Department of Labor.”

Work, like our nation, is constantly evolving, and so Books that Shaped Work in America is no different. To get it started, 24 individuals, including Perez, eight former secretaries of labor from both Democratic and Republican administrations, department staff (including an intern), civil rights leaders, critics, authors, media personalities and staff from the Library of Congress submitted suggestions. Among the contributors: former Secretaries of Labor George P. Shultz and Robert Reich, authors Daniel H. Pink and Joan Acocella, Solicitor of Labor M. Patricia Smith, Liz Claman of Fox Business News, President of the National Urban League Marc Morial and Scott McGee of Turner Classic Movies. Their recommendations are included on the initiative’s website, along with brief summaries of each book and links to related U.S. Department of Labor resources.

Now the public is invited to expand the list. A simple, online form makes it easy for anyone to suggest a book.

“From a simple tale for children like ‘The Day the Crayons Quit’ to a scholarly tome like ‘Quality, Productivity and Competitive Position,’ the books on the list demonstrate the rich breadth and depth of work in America,” said Carl Fillichio, the department’s senior adviser for public affairs and chair of its Centennial. “As we continue to mark the Department of Labor’s 100 years of service to workers in our country, this project is a terrific way to educate the public about work, workers and the work of the Labor Department. Watching the list grow, and hearing the discussion broaden, is going to be very exciting.” Read Fillichio’s Get Out Your Work Books blog post.

The project was inspired by the Center for the Book in the Library of Congress’ 2012 Books That Shaped America exhibition, which explored the impact of books on American life and culture. Many of the books in that exhibition had work as a central theme, bringing to light the significant role published works have played in shaping America’s view of workers and workplaces throughout its history.

What book shaped what you think about work and workplaces? Suggest a book and become part of the project.