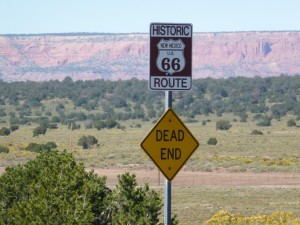 Dead end. It conjures up a dark, dismal alley you can’t pass through. It’s not a good image if you’re trying to get somewhere, most especially getting somewhere in your career. What is a dead-end job, and how can you know if you’re in aÂ career-killingÂ situation and it’s time for a new job?Consider the following check list. If any of these apply to you, you are probably in a dead-end job, and you may want to take some steps to change if:

1. There’s no opportunity toÂ earn a promotion.
Promotions require a distinct set of circumstances, and it’s important to realize early on whether or not opportunities are likely to arise. What should you look for and whatÂ questions should you answerÂ before taking the job if promotion is your goal?

Is there mobility in your organization?Â If the people in the positions you’d likely move into have been there for more than five years and you get the sense that they like their jobs and are well respected in the organization, don’t count on reaching the next rung in your organization’s career ladder anytime soon.

Get my free white paper:Â 5 Mistakes Job Seekers Make and How to Avoid Them.

Is the organization growing?Â In strong, vibrant companies, even if some people stall or purposely stay in positions for years, or even decades, there may still be opportunities for advancement if the organization expands. For example, opening a new office or branch could result in new promotion opportunities. Do some sleuthing to determine if there is any potential for organizational growth.

Keep up-to-date with local news if you work for a local organization, or with corporate information if you are in a large company. Assess the likelihood ofÂ new jobs opening up. If you don’t see strong potential for opportunities, you may need to come to terms with the fact that you’re in a dead-end job.

Does the company promote from within?

If you sit by and watch candidate after candidate from inside your company apply for promotions, only to be usurped by external people, it’s possible your company has a written or unwritten culture that does not support internal promotions. If that’s the case, and you’re working there, you can hope you’ll be the exception to the rule, or you can realize it’s unlikely for you to win a promotion in your current company.

No one’s had a raise in years.

In some definitions, a dead-end job isn’t so dead as long as raises come regularly. Perhaps getting a promotion is unlikely based on current staffing, but your company is doing well enough to provideÂ regular raisesÂ or cost-of-living increases. It’s up to you to decide if a raise saves your job from dead-end status.

When is the last time you earned a raise? Does the money, or the benefits that accompany it, keep you satisfied about your job and the organization where you work? It’s up to you to assess how these specific issues play into whether or not you are in a dead-end job.

You don’t even want a promotion.

Another consideration: you could be in a de facto dead-end job if you wouldn’t apply for a promotion at your current company if it were the last job on earth. Maybe your organization has no stability and plenty of opportunities for promotion because there is a revolving door of people in leadership positions. If you’ve watched people take jobs only to be treated poorly and then chewed up and spit out before they leave at the first chance they get, you’re probably not lining up to take your turn at a promotion.

While we all think that we can do it better than the last guy, if you’re realistic about what a promotion means and have no plans to apply for one, you are essentially in a dead-end job.

You don’t have what it takes to get the next job.

Want to avoid typical job seeker mistakes? Get my free white paper:Â 5 Mistakes Job Seekers Make and How to Avoid Them.