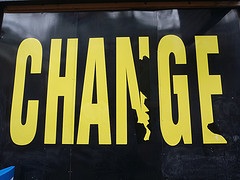 How are you managing change? Hank Jackson, the Society for Human Resources (SHRM) CEO opened the organization’s national conference last week with comments centered around the pace of change. Explaining that both success and failure can come at break-neck speed, Jackson reminded attendees that being flexible is one way to prepare for change.

Companies he mentioned who did not adapt as quickly as needed and paid the price? Blockbuster and Borders.

Preparing for change involves a workforce ready to compete in a global economy — and who have skills we need right now — and that we’ll need going forward.

The importance of change and being adaptable was also a key theme in Malcolm Gladwell’s remarks. Gladwell, best-selling author and pundit, pointed out how even the way change happens (or tries to happen) is changing!

He compared the Civil Rights Movement of the 60’s, which was an organized and hierarchical movement with strong, top-down leadership to the “Occupy” movement of the past year, which had no leader, no specific ideology or strategy and was loosely organized at best. Gladwell’s point? Millennials prefer unstructured movements — they learn from Wikepedia (many authorities), not the encyclopedia (one authority). Gladwell explained, “They take a profoundly different attitude toward authority and toward expertise.” Gladwell explained this as a paradigm shift from hierarchies to networking, from discipline to flexibility.

However, he closed his remarks by explaining that “networks can start revolutions, but hierarchy is needed to finish them.”

An interesting way to think about and evaluate change — and how we approach change and its results.

What does this all mean for job seekers and business owners?

How are you preparing for your “next thing?”

If you are a job seeker, are you embracing new technologies and new ways to demonstrate your expertise and expand your network? While I’m not on the “resume is dead” bandwagon, we all know being competitive means jumping into using new tools, which may be uncomfortable or even difficult. You don’t want to use Blockbuster as your model, though — if you don’t change, you will probably be left behind.

Are you approaching your challenges in an organized manner, or are you more an “I’ll take it as it comes” type of “planner?” Maybe you’re not looking to start a revolution, but if you are (maybe in the form of a new business idea?), are you incorporating some hierarchical structure?

Hank Jackson reminded us, “Something that sounds like sci fi today can put you out of work tomorrow.” He also noted, “If you don’t know where you are going, you will end up somewhere else.”

Things are changing. You need to change, too.