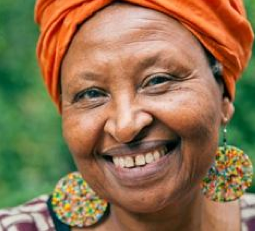 Inspired to quit her job and withdraw $10,000 from her retirement account to start the African Immigrant and Refugee Foundation, Wanjiru Kamau’s story could inspire your career change.

Civic Ventures, which awards The Purpose Prize, is a think tank on boomers, work and social purpose. The organization introduced the concept of encore careers, which combine meaning, continued income and social impact. They provideÂ  social entrepreneurs over 60 $100,000 each for using their experience and passion to make an extraordinary impact on some of society’s biggest challenges. Now in its sixth year, the $17 million program is the nation’s only large-scale investment in social innovators in the second half of life.

When Kamau, a former Penn State University administrator and adjunct professor, met survivors from the Rwandan genocide, she saw that some were illiterate and bewildered by modern city life. Seeing them took her back to her own childhood in rural Kenya, growing up without running water or electricity, and carrying loads on her back that left her permanently scarred. An expert in mental health and intercultural communication, she had the credentials to help. So in 2000 she decided to quit her job, withdraw $10,000 from her retirement account and move to Washington, D.C., home to many African immigrants, to start the African Immigrant and Refugee Foundation. The organization has since provided services – including mentoring, tutoring, assistance with human trafficking and domestic violence cases, and mental health care – to more than 6,000 immigrants from 45 countries.